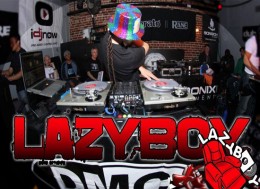 DJ LazyBoy is anything but lazy when it comes to DJing his gigs. He approaches life and DJing just the same…as one big adventure.

DJ LazyBoy Brings His Passion For Life To The Turntables

Diagnosed at age 14 with  stage IV Squamous Cell Carcinoma that originated in his nasal pharynx DJ LazyBoy refused to give up and beat the deadly disease. Along the way DJ LazyBoy developed an intense passion for life. This passion carried over into his love of DJing. He would approach every gig as an adventure in music. DJ LazyBoy’s no holds barred DJing often led to a “one and done” situation with the local high schools. This DJ is a party rocker no doubt! Unlike most DJs DJ LazyBoy is content with DJing and has no desire to produce beats. DJ LazyBoy gains satisfaction from rockin the club along with a little turntablism here and there. How long have you been DJing? Who influenced you to start DJing?

I’ve been DJing since Dec. ’99. A couple of friends at the teen center used to spin. I had a bunch of CD singles that I knew would get the dance floor jumping so I asked to play some. The DJs fascinated me when they were blending music, so I got me some Numarks and started buying records at the local shop and never looked back. I got pretty good at the technical side of things quickly. Made my first mix a week into practice and sold it at school for $10 a pop and sold a bunch!!! Nobody really had the means, at least out where I lived, to get new music and get it in mixes, so I was that kid who supplied the hot jams in mix form. My main influences as a DJ growing up were DJ Jam, Apollo, Vinroc, Mr. Choc, J. Espinosa, Rectangle, Revolution, Spinbad, Z-Trip , Jazzy Jeff, JFB, IceWater.

What was your first gig?

My first DJ gig was there at the teen center. Then I moved on to the local bowling alley. From there I started djing at this community center for the youth in a kinda rough part of town. I just kept getting gigs. I got noticed by a lot of the other DJs because I was so hungry for this art. I would practice from 8pm-4am with my headphones on. My parents were always on my case about loud music so I hardly ever spun through the speakers. I would beg all of the DJs in my town to let me hop on the tables and was finally granted my wish at a club in Santa Rosa called Rumors. I played the back room on Wednesday nights 18 & up at Strawberry Wednesdays with Wild 94.9. We would mainly play a bunch of house music. At that point I started throwing my own parties aimed at the youth. I linked up with a bunch of locals and we made it huge out here.

Being from the Bay Area its almost mandatory that you have to battle to prove yourself. How many and which Battles have you been in?

Lots of DJs are doing remixes and producing beats to expand their skills. Are you doing any projects like that?

I do not do any remixing and producing. I have made a couple edits I call “Hands On Edits”. They are for the party DJ who likes to scratch. I also made one mash-up that I thought was pretty fun but that’s the extent of it. Perhaps in the future.

What is your most memorable gig?

My most memorable gig?… hmmm. I don’t know man. Probably when I used to spin at the high schools. We would get crazy! I would get on the mic and get kids to mosh! I would DJ in weird spots like on the announcer booth above the basketball court looking down on the homecoming dance. I was young so we’d always have the cute senior girls up there dancing with us. I’d usually never get hired again by faculty but we’d have a blast! Haha

5 records you always take to gig?

5 records… hmmmm. Probably my red controls, clears, and a transition vinyl. lol! Okay when talking about tracks I usually will play Kick in the Door. I have a routine to it. I used to play some heat off the Motown Remixes first album. I have an Ojay’s vs Puff Daddy All About The Money Money Money mashup that’s super hot. I play that one a lot. Plus I used to do a live mashup of Axel Fowley vs Smack that… lol… sounds retarded to explain but it’s dope and Eminem is fun to play. I can get super cheezy at times. I’m that guy who will play some super curveballs just to bring it back and be different. Some of my dj friends walk away from the tables embarrassed to know me sometimes. I’m like whatever. I’m one of few who will take those chances lol!

What would be your dream gig?

My dream gig would be to play a Golden State Warriors game. Also to become a tour dj, even if it’s just with a sponsor and I go around to malls and spin/scratch/trickmix.

Tell us about the Record Rockers.

Record Rockers are a bunch of cool cats who just love DJing. We all have our own agendas and we don’t spin together often. I am fairly new to the crew but it has been an awesome treat to spin with these guys. They are all really awesome people. Solo is probably the dopest I’ve seen in the crew scratching wise and club wise, but I haven’t seen all of them play in the club yet. It all started when I met Billy and BigMan 808 at Chrome Lotus in Santa Rosa. Then the next time I saw them was when Crimson had DJ IceWater out at The Skillet @ Layover in Oakland. I grew up listening to him and taking notes from his Mixtape Gods series with DJ Cobra. The night Neo Geo spun was awesome. The crew was there and they all showed me a ton of love like we were already family.

Check out some mixes by DJ LazyBoy on Mixcrate.